During my trip to Canada I saw a lovely display at Lake Louise, capturing the past of pioneers mountaineering in the area. I was enticed by the old attributes. The skies were familiar to me but the pair of snow shoes really got me. It was right there and then I decided to make a pair in miniature. For various reasons I'd to do it quick, one of them being I'm currently working on a really neat book mill as well. 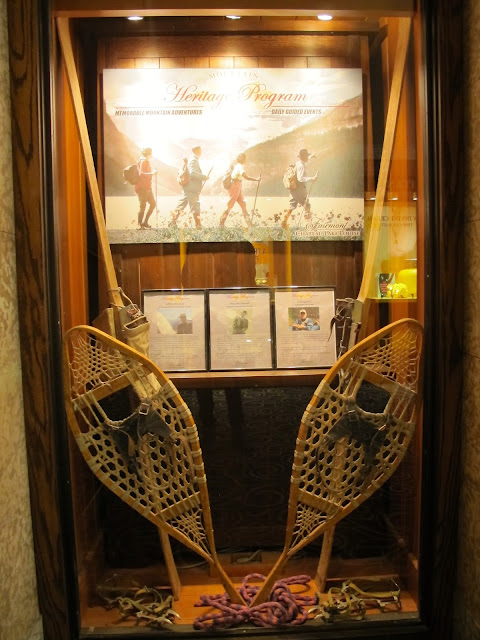 So straight after getting back from Canada I did some research. It soon became clear various times and regions have their own shape of shoe and type of lacing, and after reading into the small hours, I opted for a type that's common in the North East of Northern America, called Huron. The weaving I choose for is a combination of modern day techniques and the 'old fashion way'. 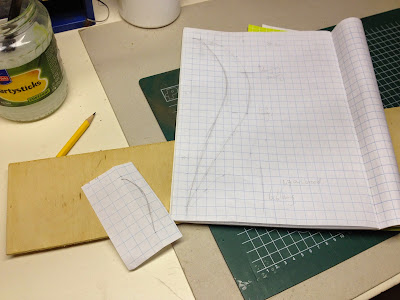 It started out with making a jig to bend the beech wood to shape. Normally the shoes are made of ash, but I didn't have that so beech it was. Which is perfect for bending too, by the way! 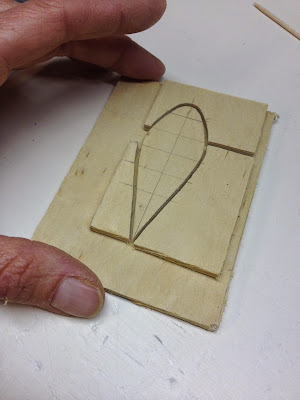 When the jig was set & done I could steam the 0.6 mm thick mm strips of beech. A simple set up in my frypan did the trick. I took the lid of for a photo, but of course they were steamed with the lid on. Less than10 minutes was more then enough to make them soft and pliable. Bigger pieces would take more time; you want all the lignin in the wood cells to become soft. But if you steam for too long the lignin will boil out and bending can then result in splits and breaking. 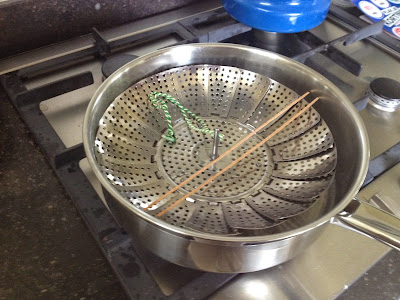 The thin strips cool off very quickly too, and then the lignin will harden up again so I'd to work fast. Placing the centre of a pair of strips at the tip of the shoe form, the sides were then gently bend down, till they touched at the back. I pressed the counter shapes tight to the strips and hammered them down. The four ends were held in place by a clamp. Then I let them dry over night. 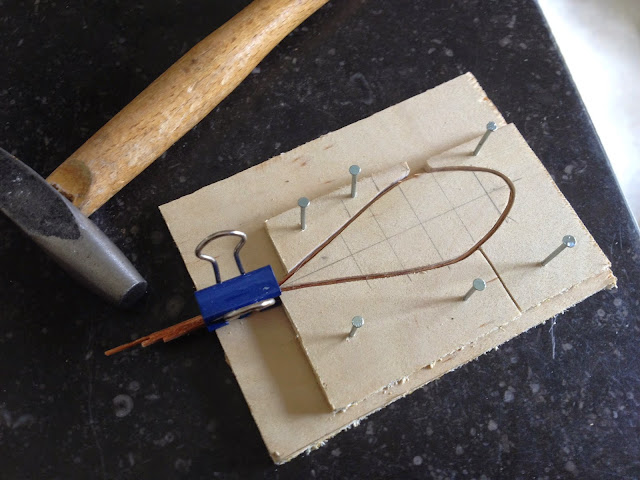 The next day I glued the strips together and put them back in the jig to dry.  Excess glue would surely bulge out under the pressure so to prevent the shoes from sticking to the jig I lined it with cling film. Simple and worked a treat. Meanwhile the braces were cut, predrilled and put into place when the shoe rims were dry. 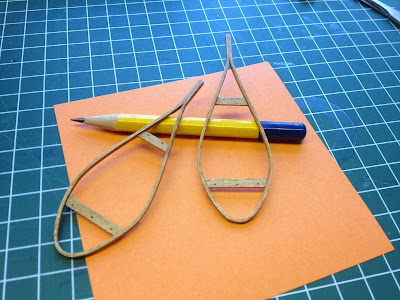 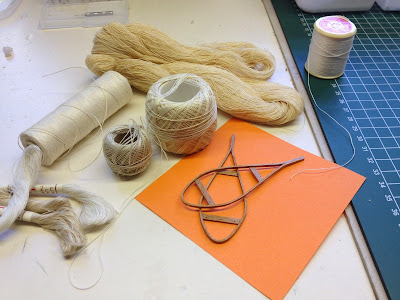 Now it was on to the weave. Old shoes have holes drilled through the rim, to take a thread where the weave is connected to. The benefit is the thread will not wear when the shoes are worn. You don't see this method of weave as much anymore in modern day shoes, which makes sense being slightly more labour intensive. Hmmm... stuff isn't made as hard wearing any more so it seems...

Neither was I confident enough to drill the holes in the narrow rim, and as these shoes won't get any wear anyway, I figured to simply weave (the more modern way) around the rim, instead of through it.

I'd an option between all sorts of thread, thick and thinner... light colored, brown, beige... and after seeing some real shoes made in that color I decided on a brown, just cos I thought it looked good. Egyptian cotton, count # 30. 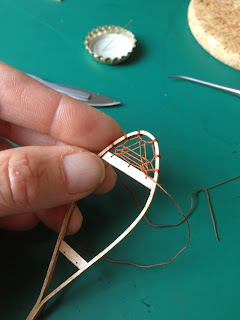 The edge of the weave was a challenge to figure out. Initially I thought of using a bobbin lace technique; the braid half stitch as seen here on the left. Turned out it wasn't as simple as I thought so it was back to the drawing board (computer) and just figure out and learn the way it has always been done.

Each time I'm amazed at how much you can learn from YouTube, like when I needed to learn how to cane a seat. And this time was no exception with tutorials on the net showing how to weave snow shoes! There where various methods and approaches shown but they all came down to the same triangular weave. But the best part were a few diagrams I'd found and with those I set myself down and started... 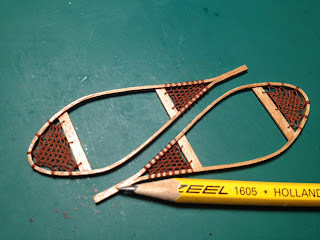 Here's the toe section finished and heel part done too. As you can see I worked both shoes at the same time, so I would be conscious, aware and remember how to tackle the particular portions I was working on. If I'd finished one shoe complete and then had to return to do the other i'd probably have had a really hard time remembering how i did it to keep them uniform. 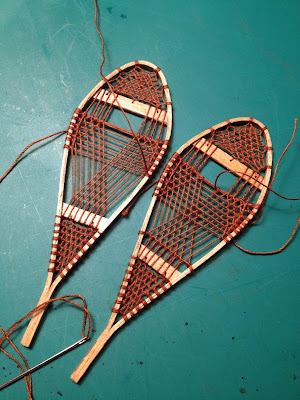 Like I said, it was a tricky job. Mostly because it took some time to find the rhythm or structure in the weave. Sometimes it was over, over, over, and then the it was under, over, under, under... I'd to stay really focused while weaving, or a mistake was easily made... Turned out it was constantly 2 steps forward, 1 step back, taking out some and redo it again until it was right. But after a while I got it :-) Or so I thought... :-/

I'd made a start on the middle part, redid them a few times and then it went OK. When I was nearly done I encountered a big mistake in one and had to take out almost a 3th of the weave. Argh...

But I got there in the end, and here's how they looked at that stage. 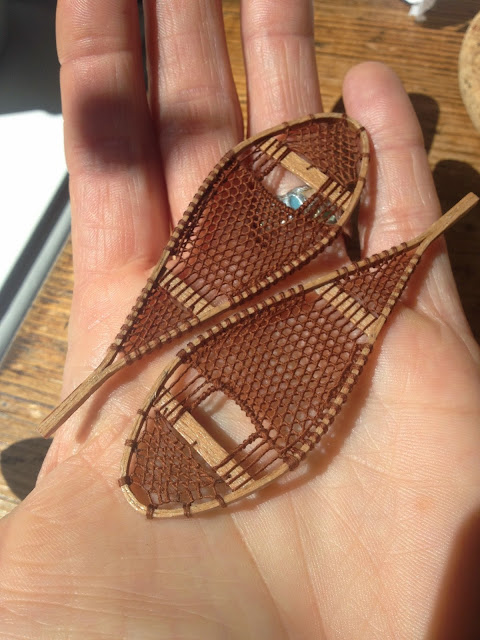 Now it was on to the binding. Native shoes have simple leather strips without buckles, but now that this pair was sort of eclectic already, I figured to give them a more modern type of binding.

On the left is a section of it; the toe part with the first of the straps. If you look close you can see they are not attached on the same side. Something I didn't found out (again!) until I was almost done so I'd to remake that... 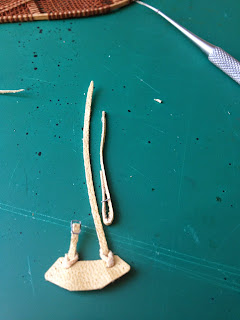 A few more pieces, buckles and finally a bit of leather polish/wax: 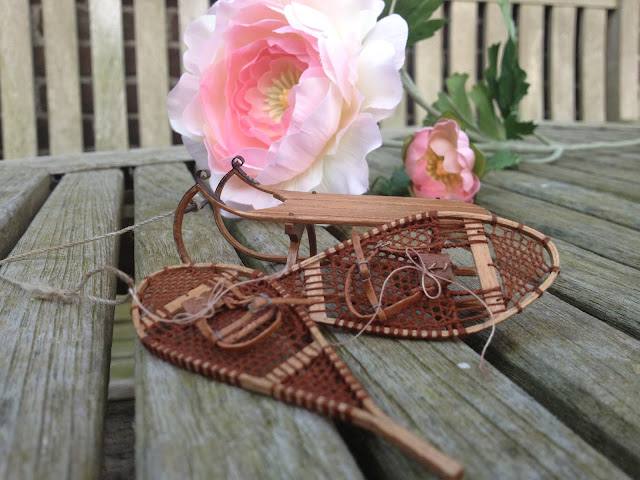 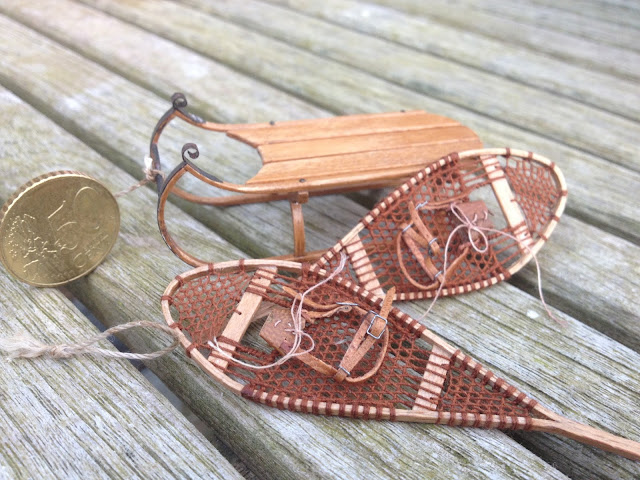 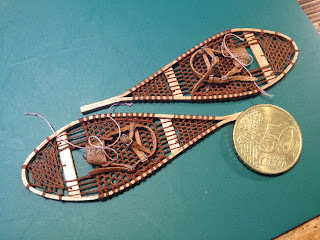 Who's up for a snow-shoe-obstacle-run? 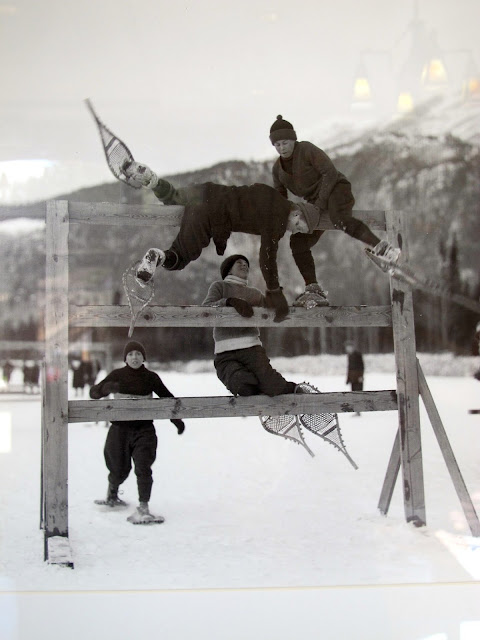 Wow, this post turned out quite long. So thank you for reading all the way down.
Have fun,

at Thursday, May 28, 2015
Email ThisBlogThis!Share to TwitterShare to FacebookShare to Pinterest
Labels: how to and tips and trics, miniature miscellaneous, snow shoes, weaving

Teachers open doors, you enter by yourself. Chinese proverb

Debora
10 minutes from Amsterdam, Netherlands
Hi! A warm welcome to every one who comes to visit. My name is Debora Beijerbacht, and here I'll be posting about all the small things in life that make me wonder. That can range from dolls houses to nature's finest creations. Be sure to check out older posts too. Enjoy reading and thank you for your visit! Debora

Proud to be Artisan Member of the Guild

Blogs that make me smile

my Dutch blog or should I say Archive?

If you want to see how it all started (in august 2007) just click on the picture of the toppost of our 18th century wooden dolls house. 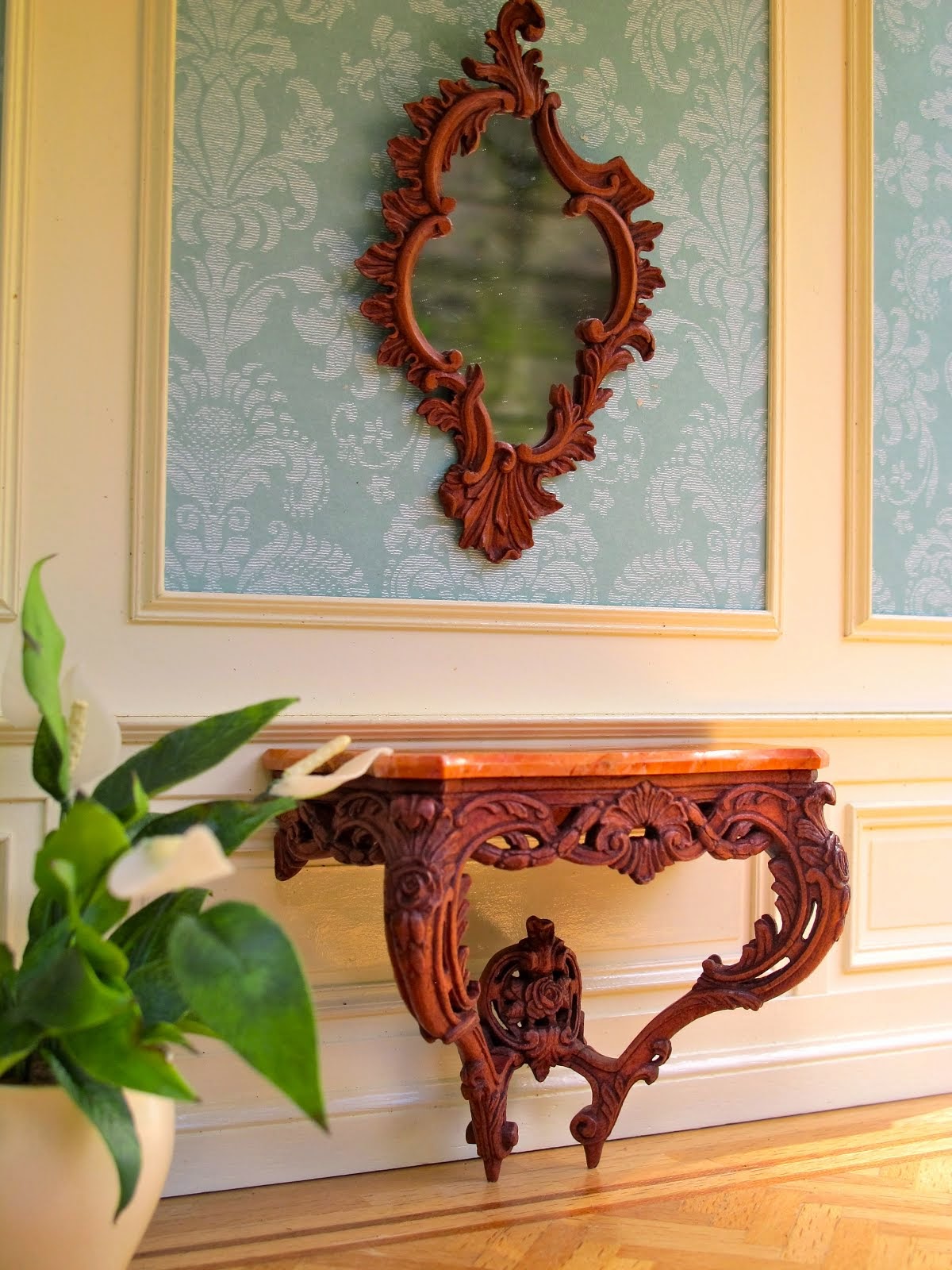 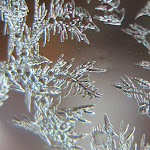 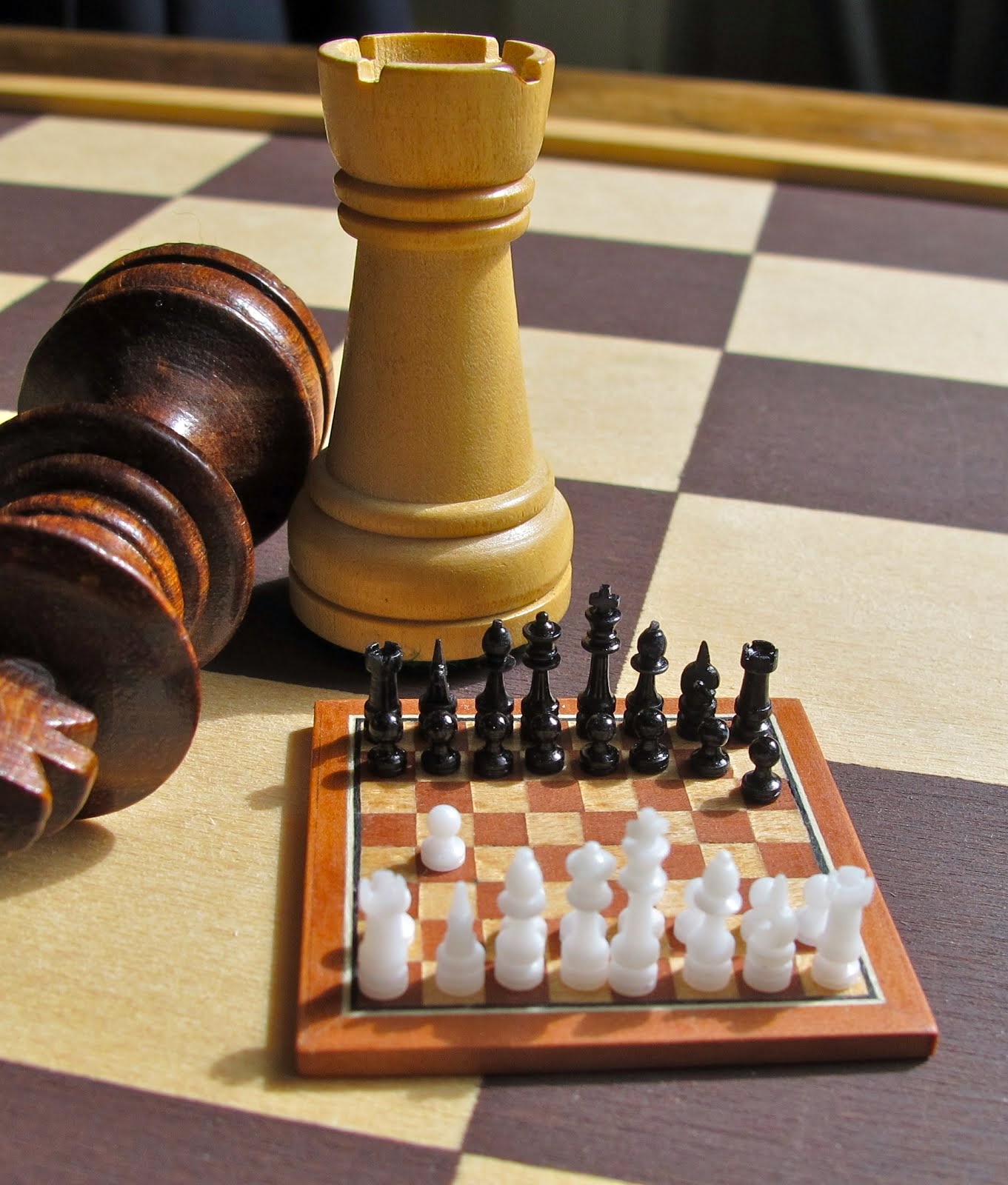 Thank you for visiting!

All materials on this site not covered by other copyright and not explicitly marked as public domain is
copyright © 2009 Debora Beijerbacht
If you would like to include any material on this site on your website or in printed material for sale, please drop in a mail and be sure to tell me what use you hope to make of it. I may be able to provide you with better material (e.g. : related items that do not appear on my site, or in some cases professional- quality photographs).